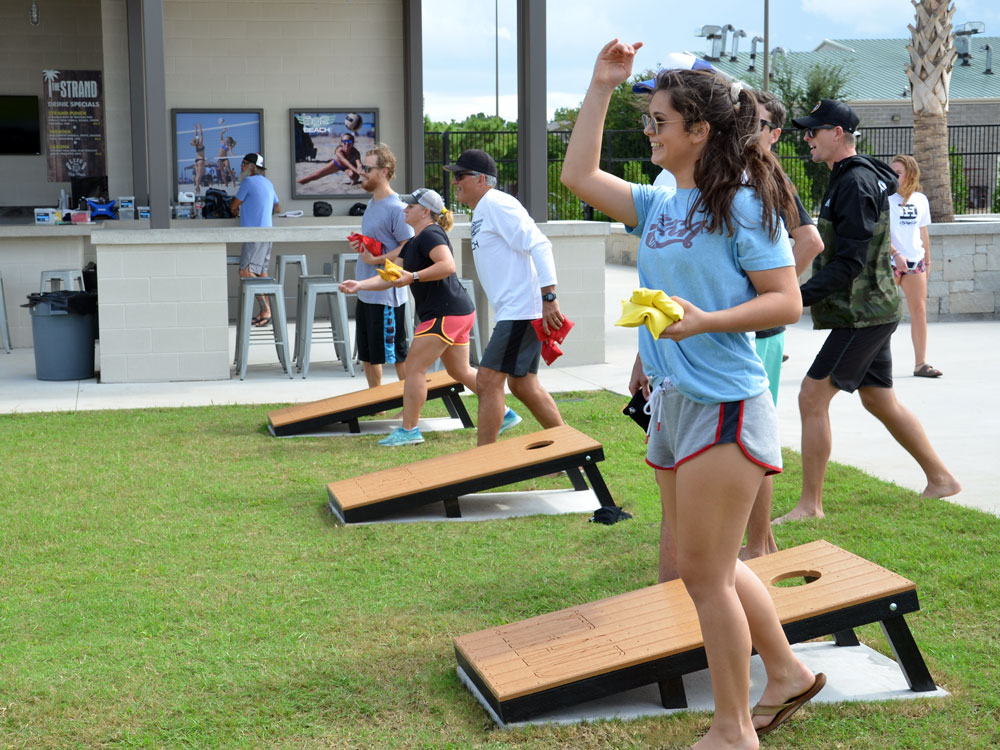 WE CURRENTLY HOST CORNHOLE LEAGUES ON MONDAYS and WEDNESDAYS. OUR MONDAY LEAGUE IS OUR MOST COMPETITIVE LEAGUE AND OUR WEDNESDAY LEAGUE IS MORE RECREATIONAL, BUT SEVERAL TEAMS PLAY IN BOTH AND THE LEVELS ARE VERY CLOSE

REGISTRATION FEES ARE $80/TEAM. TEAMS CONSIST OF TWO PLAYERS. YOU CAN HAVE UP TO 6 PLAYERS ON YOUR ROSTER TO USE AS SUBS AND YOU CAN ADD TO YOUR ROSTER DURING THE SEASON

EACH LEAGUE WILL RUN FOR 8 WEEKS WITH ALL TEAMS ADVANCING TO A PLAYOFFS ON THE 8TH WEEK.

YOU CAN WAIT UNTIL OUR NEW LEAGUE STARTS, OR YOU CAN ALWAYS JUMP INTO OUR CURRENT LEAGUE AND YOU WON’T PAY FOR THE WEEKS YOU MISSED. JUST CONTACT SCOTT ABOUT GETTING STARTED.

Registration is closed for this event.

Everyone has their own, unique way of playing cornhole. Read below to learn The Strand’s rules!

Our first and most important rule is to have fun! Everyone in our league comes out for a good time, so please exercise sportsmanship and try not to take things too seriously.

A game is made up of frames wherein each team rotates tossing their team’s 4 bags until all bags (8) have been tossed towards the opposite board.  At the conclusion of each frame, the score is calculated and added to the team’s net total. A winner is determined when a team reaches or surpasses 21 at the conclusion of a frame.  Number of frames played varies per match.

Each court consists of two boards spaced 27 feet apart front-to-front and two sets of 4 bags. Most players bring their own bags, but the Strand has some at the bar that you are welcome to use.

The schedule for each week is posted on the schedule page. Each match consists of 2 out of 3 games.

**The Strand reserves the right to extend the season due to rain outs.

The object is to be the first team to reach or surpass 21 points. Points are scored by landing a tossed bag on the board (1 point) and by having a tossed bag drop into the hole (3 points). Once all eight bags have been tossed, players calculate the points scored per team.  The team with the higher number of points is award the point difference.

The captains begin the match with a bag spin or playing rock, paper, scissors. The winner determines the side from which they will throw OR gets the first throw. The loser of the spin gets the remaining choice. In the playoffs, the higher seeded team has those privileges.

This is a risky strategy some players like to use.  It is legal.

Violations Resulting in Bag Being Removed from Board:

Bags may be removed from board if the player crosses the foul line before releasing the bag or the bag hits the ground and bounces onto the board.

The first team to reach a minimum of 21 points at the end of a frame wins the game.

The foul line is located at the front of the board. All players must toss from behind the foul line. If a player crosses the foul line on his or her toss, that toss does not count and it is removed from the board.

A minimum of 2 players per team must be present to play. (We recommend teams of 3 to 4 players to ensure enough players each week.) You may substitute players during a match after a game has concluded.

A team will forfeit their match if at least two players do not show up within 15 minutes of their scheduled playing time.

A “no-show” is when you do not provide 24 hour notice that you will not make your match or do not show for your match; it will be recorded as a forfeit.  If a team “no-shows”/forfeits twice in one season, they will forfeit their registration and will be dropped from the remainder of the season. Please let us know if you cannot make your scheduled matches so we can arrange a team to stand in for you and your opponents have a team to play. If you notify us more than 24hrs in advance, you will still receive those losses on your record, but it will not count as a forfeit

All teams qualify for the playoffs!  In order for a player to play during the playoffs, you MUST be listed as a player on the team’s current season roster and must have played at least one game that season. Rosters may be edited up to the 5th week of play.